Double, double toil and trouble;
Fire burn and cauldron bubble.
Fillet of a fenny snake,
In the caldron boil and bake;
Eye of newt and toe of frog,
Wool of bat and tongue of dog,
Adder’s fork and blind-worm’s sting,
Lizard’s leg and howlet’s wing,
For a charm of powerful trouble,
Like a hell-broth boil and bubble. 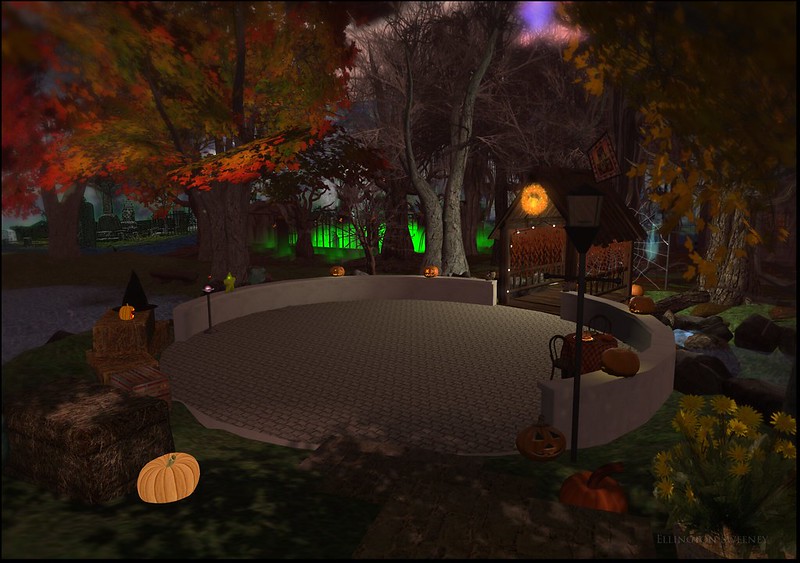 Dress as your favorite ancestor, or just come as you are. Costumes are encouraged, but not required. 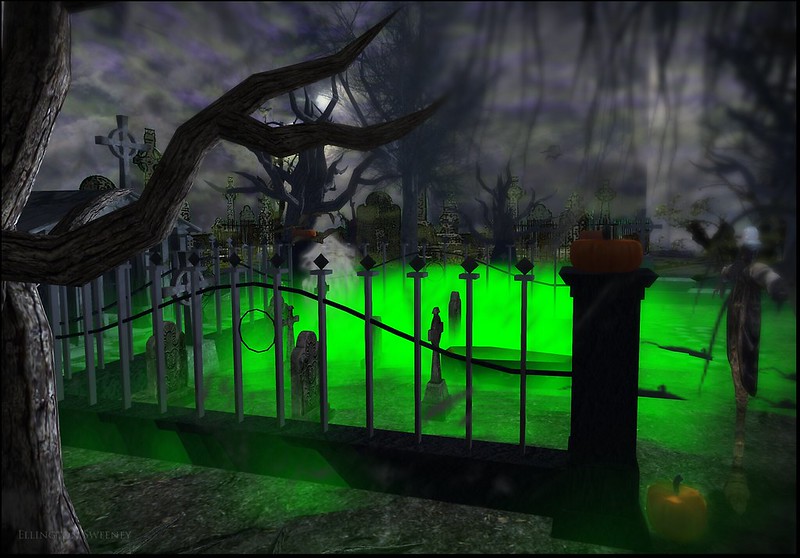 Watch where you tread. Graves of the dearly departed are all around. But as genealogists, we’re pretty much used to that, right? 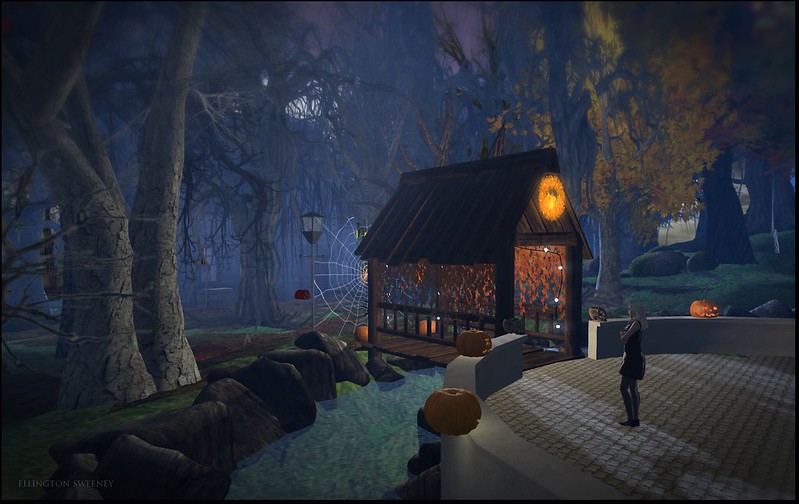 Cross the bridge and enter the haunted forest, if you dare. Or just hang out and dance the night away – our favorite DJ, Jaffee Gaffer, will be spinning some spooky tunes! 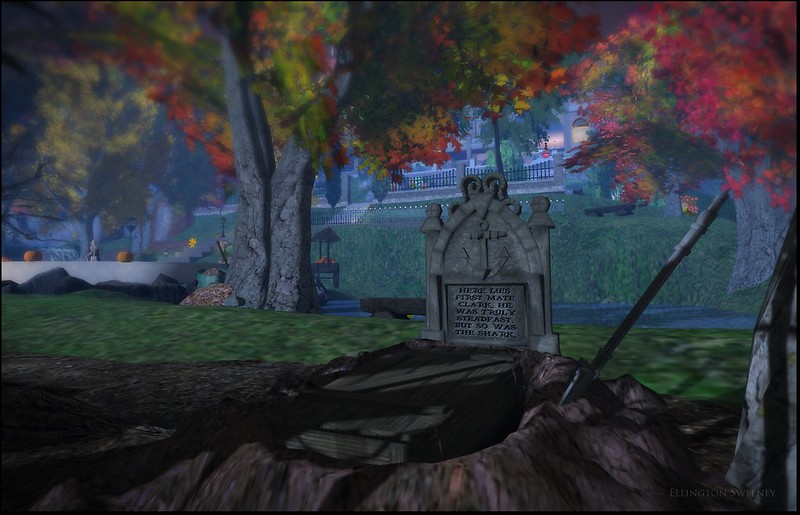 Don’t be a DEADbeat like this guy and miss the party! 😀 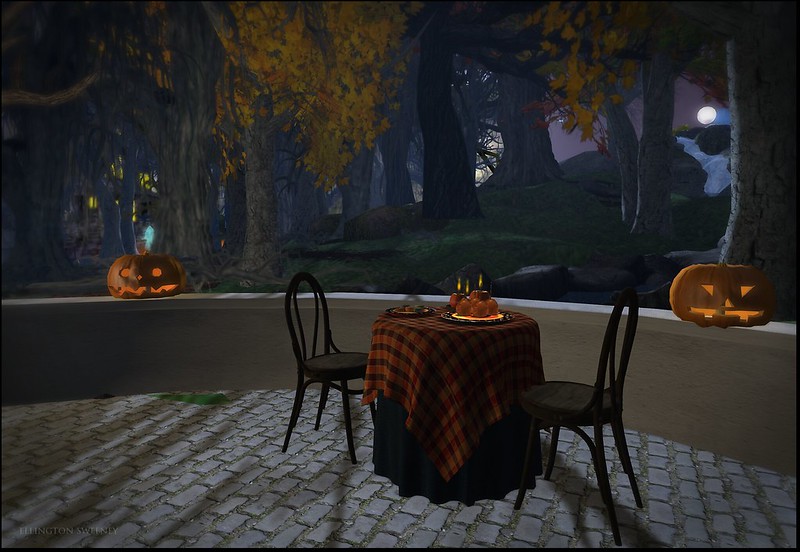 Many, many thanks to DeeDee and Sherlock for setting up this supernatural sim! Now, here’s your hearse to the party!

Double, double toil and trouble;
Fire burn and cauldron bubble.
Cool it with a baboon’s blood,
Then the charm is firm and good.

*Song of the Witches from William Shakespeare’s Macbeth.

Recently celebrating its sixth anniversary in SL, The 1920s Berlin Project is an historically accurate, virtual model of 1929 Berlin, Germany. The project is designed to allow visitors from all over the world to explore, experience, and immerse themselves in the daily life of this city during the Weimar Republic. The sim was created, and is mostly managed, by an historical consultant with the avatar name of Jo Yardley. 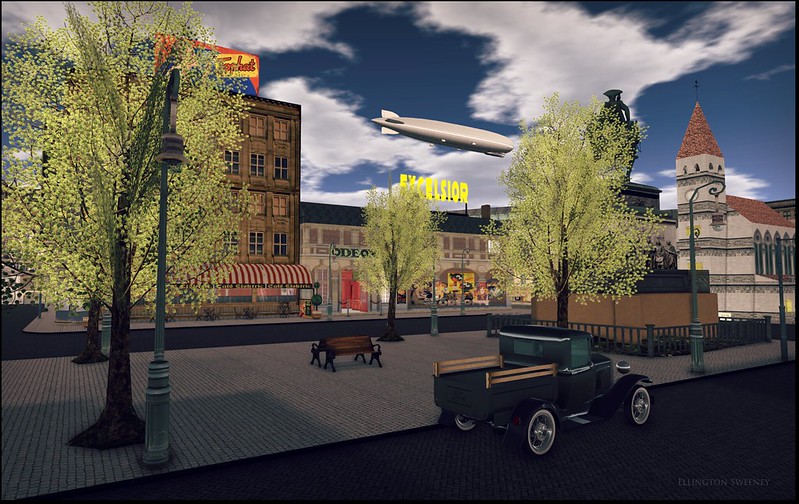 ‘Second Life’ gives you the opportunity to travel in time, virtually. Berlin in the 1920s was a very interesting time, politically, culturally and in many other ways. We wanted to try and recreate the atmosphere of this fantastic city in that amazing era. Our ideal was to show an as realistic and authentic as possible experience of visiting this part of history. Most historical sims show a somewhat romanticised, clean and charming view of the past where everyone lives in big houses and walks around in lovely clothes all the time. They offer the past up as they would have liked it to be. We wanted to show our visitors both sides of the coin; the amazing modern houses near Unter Den Linden where modern rich people in the latest fashion live a life of leasure, but also the dirty, narrow streets with tiny apartments where the poor try to survive. The 1920s Berlin Project offers you the chance to explore these two different worlds and even become part of one, or both of them. Spend your evening dancing in the mirror room of the luxerious Hotel Adlon or spend it in a damp basement Tanzlokal where they have lukewarm beer in dirty glasses. 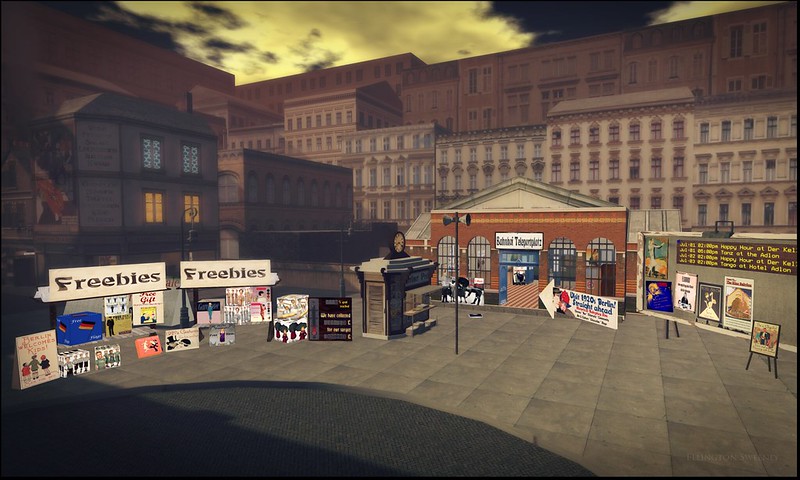 Please note that this is a strict role-play sim, requiring all visitors to dress in period clothing and use period-appropriate mannerisms. Failure to comply with the dress code could get you ejected from the sim. Fortunately, the landing point is loaded with freebies, including clothes and hair for women, men, and children. Be sure to stop by the news stand to pick up a 1920s Etiquette Book and other reading material. There is even a mall-style shopping center where you can purchase free and non-free items such as clothing, furniture, and music of the era. Once you are dressed and ready to go, head into the train station (follow the big arrow) for a ride to the main sim. 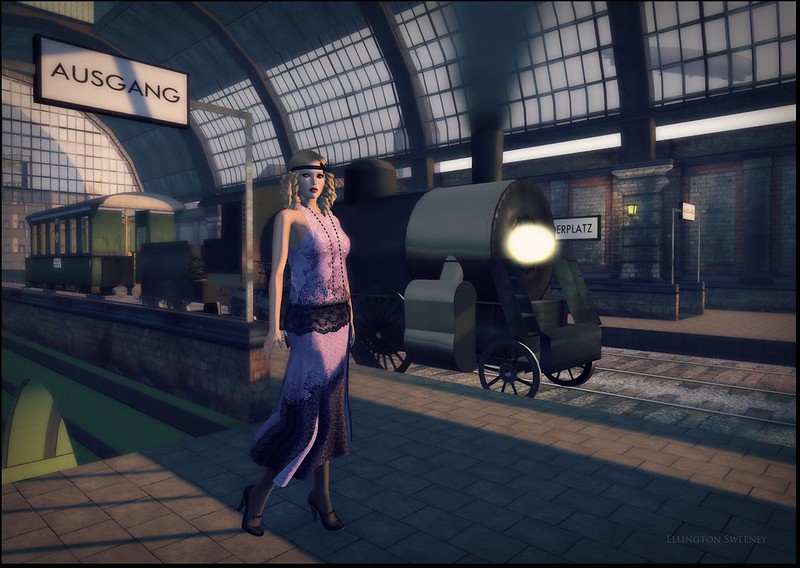 From The 1920s Berlin Project Dress Code note card (which you can pick up in-world):

Women: In the 1920s dresses and skirts had become much shorter, but they only showed knees for a very short period in time around 1929. For most of the 1920s dresses and skirts covered the knees. This is one of the things we will be keeping an eye on, walking around showing your thighs just was unacceptable back then. Women didn’t show much nudity. Sadly most “flapper dresses” you may find in SL are not at all authentic and much too naked. You may wear those if you’re a chorus girl on stage here, but even they wore proper coats and decent dresses when they walked outside.

Men; Men had it easier, they usually wore a 3 piece suit and almost always a hat or cap outdoors. Gentlemen removed hat or cap at many social occasions such as visiting someone or dancing. Men NEVER had long hair though.

After reading that, I was a bit intimidated about finding the right attire for my visit. I eventually picked up this pretty dress (above) by Volstead for free on the Marketplace. No one said anything to me, nor did I get ejected, so I can only assume that I was dressed appropriately – my knees were covered! For inspiration, check out the German Fashion in the 1920s Flickr group. 🙂 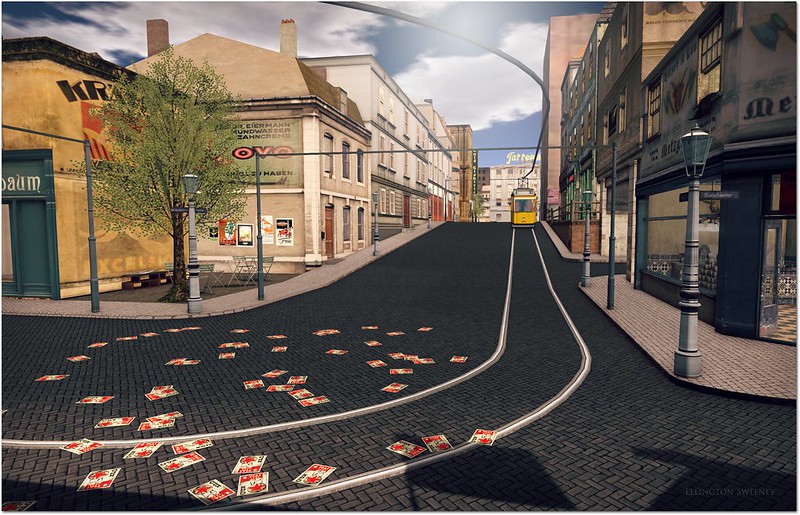 In the 1920s Berlin neighborhood, you will find a variety of buildings, including exact replicas of real life buildings, such as the Zum Nußbaum and the Brandenburg Gate (neither of which are in my photos – sorry!). There are also reconstructions of fictional buildings used to show other aspects of life, even if such a building was not really at that location in Berlin in 1929. 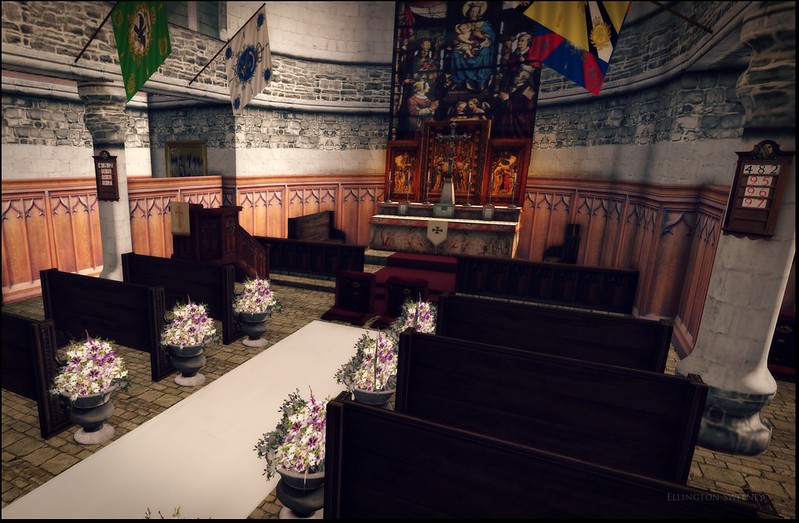 Below are a few of the sim’s role-play rules (you can pick up a complete list in-world). Remember, the rules are not meant to be restrictive, but rather to enhance the authenticity and realism of your experience.

If you are a human avatar, -OR- if you have a animal avatar, make sure you look realistic and authentic for the theme of our sim. If you are spotted in Berlin without an 1920s outfit, you will be asked to change your clothes or leave.

We will NOT allow Nazis. It goes against the rules of our sim but it is also directly against SL policy. So no Nazi uniforms, logos, gestures, etc.

No other uniforms either please, unless you ask us permission first or if it is a uniform sold here in Berlin, such as the 1920s Navy uniforms. We don’t allow any other uniforms because in our sim most uniforms come with a certain level of responsibility and power, such as the police officers we have here.

Child avatars are welcome, AS LONG AS THEY ARE AUTHENTIC AND REALISTIC for 1920s Berlin. 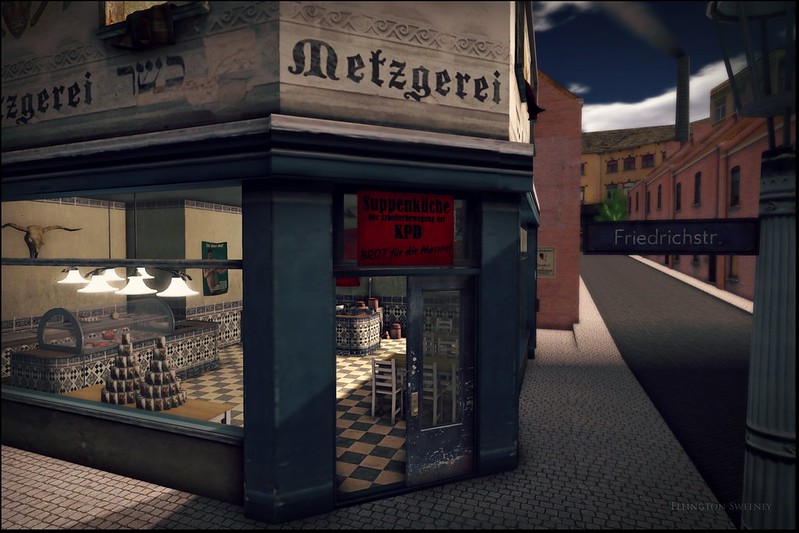 The 1920s Berlin Project includes shops, restaurants, a school, a cinema where you can watch real 1920s movies, and a nightclub where you can listen to original 1920s music. Several inhabitants “live” in local apartments, and have virtual jobs in the city. Because 1920s Berlin is one of the few sims in SL that are built to a realistic scale, it received extra interest in 2013 after Oculus Rift users discovered that it was the perfect place to try out their new headsets. You can read about the first visit here. 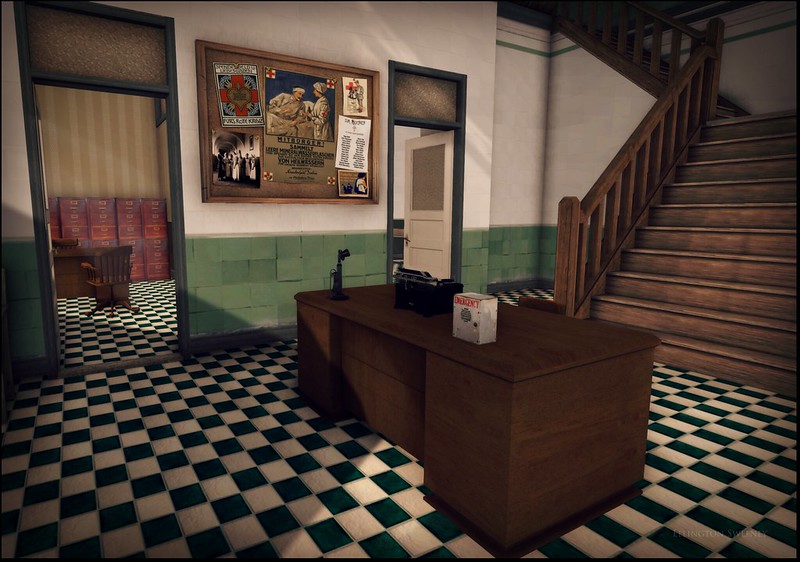 While there are many English-speaking visitors and residents in 1920s Berlin, it is common for residents and visitors to greet each other using German phrases, regardless of their language of preference. Additionally, there are many realistic signs and posters hanging on the city’s walls and in its buildings, some of which you can pick up for free at the landing point. 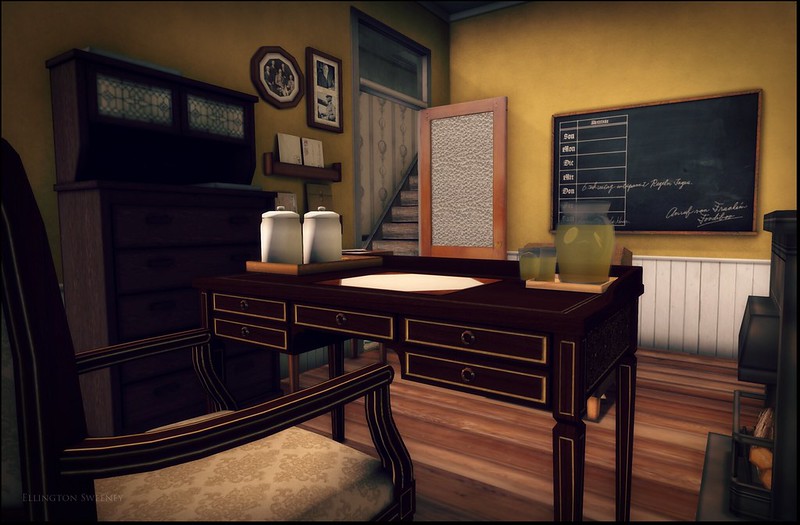 The main goal of The 1920s Berlin Project is to give visitors the chance to virtually immerse themselves in the past. The experience is entertaining, as well as educational, as the sim is used for classes in all sorts of historical subjects. I found it interesting that the discussion of Nazi politics and WWII is acceptable on the sim, and in fact, “We often have debates about them over a glass of schnapps in the club.” (No, I did not participate in such a discussion.) This topic is not covered up or banned at all – only the uniforms and weapons – and if you look around the sim, you will see traces of this era of history. For more about this topic, please visit this post on The 1920s Berlin Project’s blog. 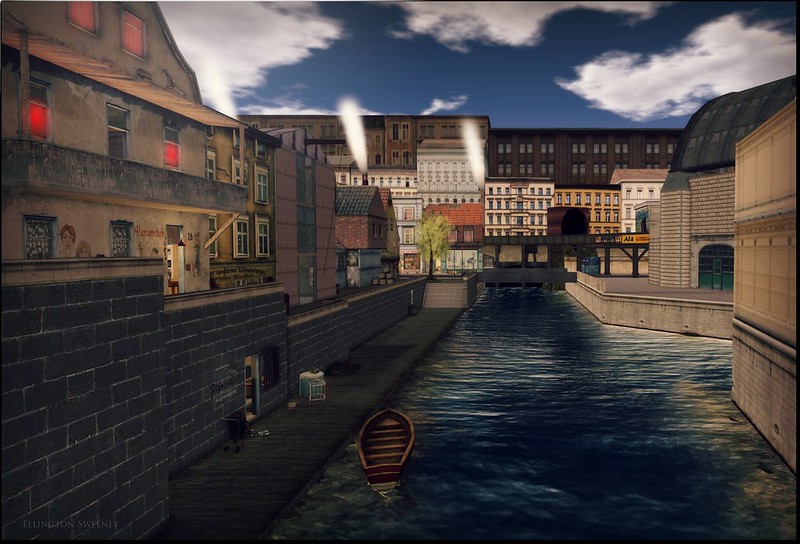 The 1920s Berlin Project is well-known for its arts and entertainment. Nightclubs such as Cabaret Eldorado, based on a real 1920s club for gay people and cross dressers, theaters such as The Odeon Theatre and The Asta Cinema, as well as The Hindenburg Schule, all boast educational activities, films, dancing, lectures, or live entertainment. The most active place on the sim is the nightclub Der Keller, located in a basement in one of the city’s back alleys. At Der Keller, one can dance The Charleston, or have a virtual drink at the bar and chat with others. 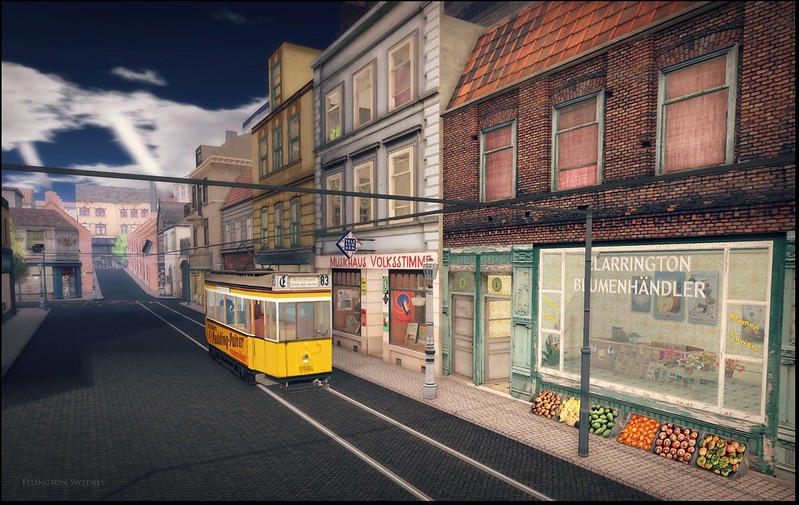 Since its founding six years ago, The 1920s Berlin Project has been continuously expanding and upgrading. Starting small, it has always managed to pay for its own upkeep, thanks its tenants, supporters, and random donations from visitors (there is a donation kiosk at the landing spot). Rumor has it that founder Jo Yardley has plans for more historically-themed, role-playing sims, including a 1940s London sim.

For more information about The 1920s Berlin Project, check out the following:

In honor of this weekend’s Independence Day celebration in the United States, I decided to pay a visit to New World 18th Century Boston Harbour. From the place profile:

Welcome to 18th century Boston Harbour. Where Navy fleets & Privateers gather to battle, tell stories & party at the White Horse Tavern. Furry and Human friendly sims. This is a pro Navy sim! Pirates are not welcomed nor allowed to participate. 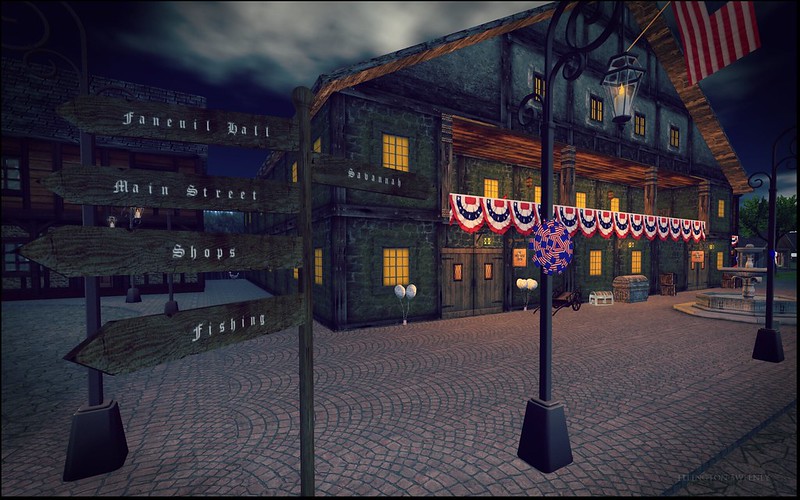 As you can see, the town is decorated for the 4th of July. Head down Main Street for shopping and a visit to Faneuil Hall. 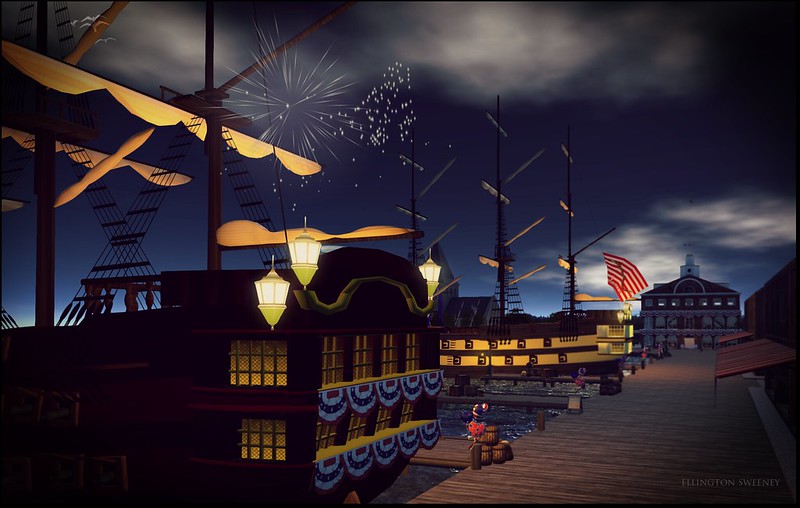 Some of the boat owners were already getting into the holiday spirit: this ship has its own fireworks display! There was actually a giant, yellow ducky in the boat slip next to this one, but I derendered it (made it invisible) for the photos. Faneuil Hall is visible at the end of the boardwalk. 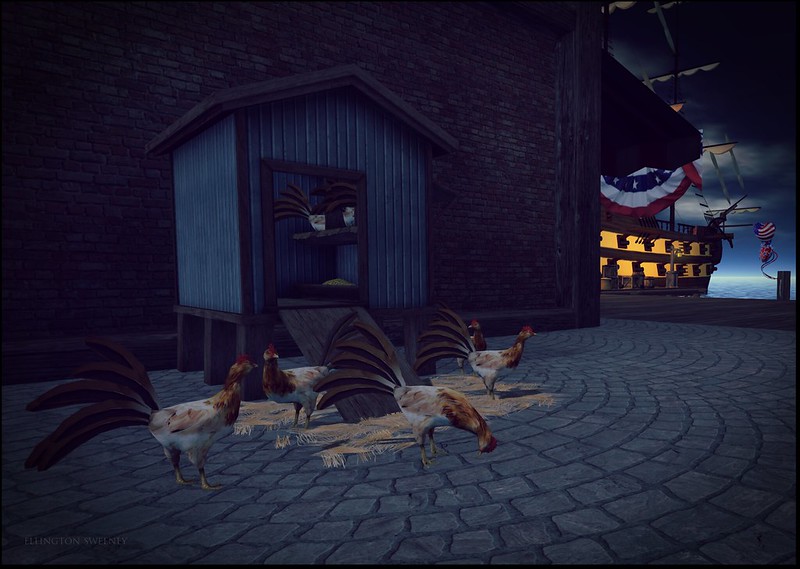 There are plenty of quiet and peaceful places to wander. If you like to fish, you can buy a fishing pole and spend some time trying to catch “the big one.” I didn’t actually see anyone catch anything, so I am only guessing that they were fishing for fish. It’s hard to tell sometimes in SL. 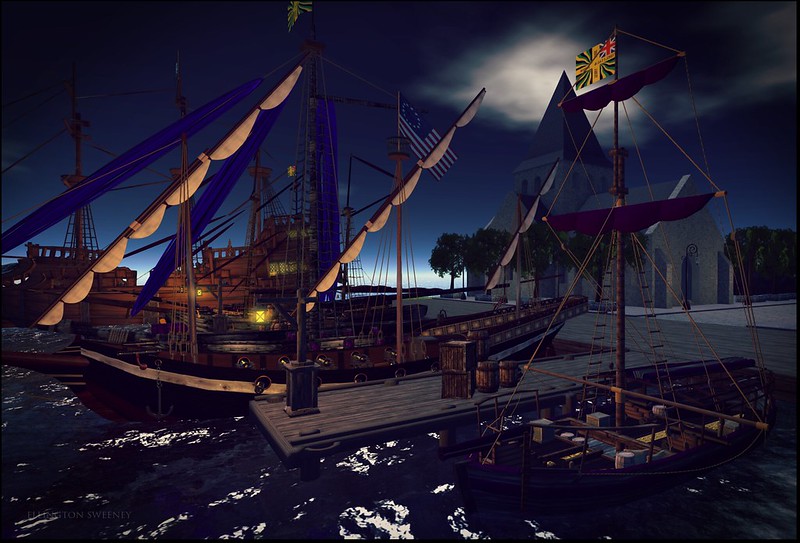 New World 18th Century Boston Harbour is not a strict role-play sim, so you are not required to dress in period clothing, adhere to specific mannerisms, or even be “human.” No pirates, though, so don’t show up all pirate-y. The maturity rating for this sim is M for Moderate. 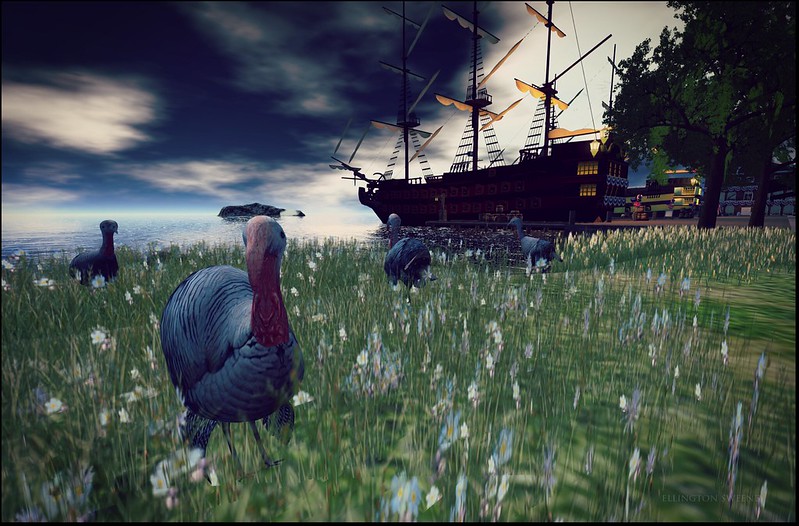 Be careful where you walk – wild turkeys roam the streets. This guy even came right to the camera for his close-up. 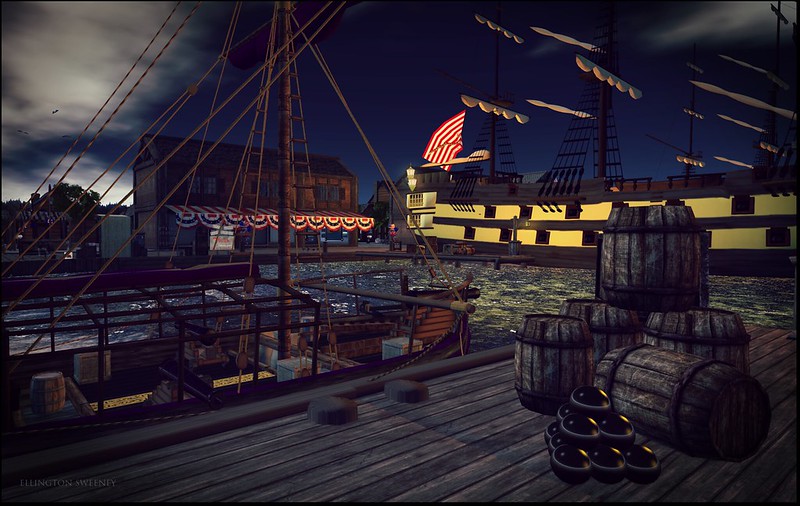 Everyone I met during my visit was pleasant and helpful, even the cat avatar who mewed at me. 🙂 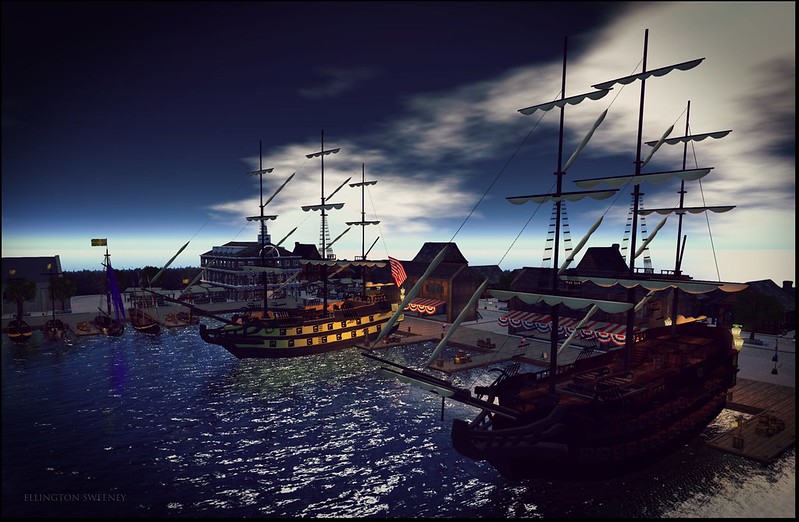 Stop by New World 18th Century Boston Harbour for a visit to the past this weekend. You might even see some fireworks!

Create Your Avatar to Join the SL Genealogy Community View our Calendar of Events

Learning & Having Fun in SL